Bandinfo• back to All bands 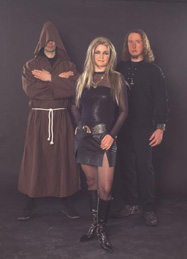 Beginning of 2000 the halls of CCP studios were entered to record the debut CD/LP „Of...Battles, Ravens And Fire". Battles and choirs invite the listener on a journey through long forgotten times full of myths and legends. With this masterpiece Fylgja Munin and Hugin laid the basis for a new age of creations. A musical journey far off the trampled paths of metallic art. Now its time to present again a new version of the mighty "…Of Battles, Ravens And Fire" album with more than 35 min. of bonus material! The whole bonus tracks were recorded in 1999/ 2000. In autumn 2004 HROSSHARSGRANI decided to re-release this mighty Viking epos - but it shall not be a simple re-release, no, he decided to create a new Killer-Artwork and included the Demo Track "Fimbulwinter" an ode the land of Blood and Ice, also the 1999 rehearsal track "Der Pfad Zum Tor Der Toten" - a 24 min. long Pagan Black Metal track will be part of this mighty re-release!
Now you can listen to the whole Vikings journey, with new artwork and more battle magic! The journey takes us back to the glorious ages of heroism and war, to the mighty Nordic world around Valhall. - a must for each Viking Warrior!

The Secret Fire
Luthien
Flesh And Steel
Dragonmagic
...Where The Shadows Lie

Of Battles, Ravens and Fire